The Sun Is Also a Star (Paperback) 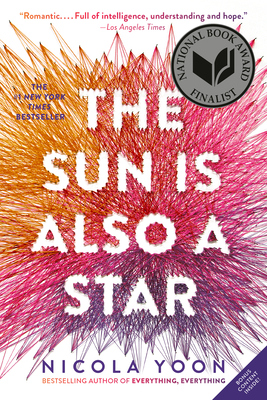 The Sun Is Also a Star (Paperback)

“Romeo and Juliet. Dash and Lily. Eleanor and Park. Natasha and Daniel are the next great couple! While romantic poet Daniel wholeheartedly believes in the possibility of love at first sight, science-minded Natasha is much harder to convince. But time is not on their side, as Natasha and her family are set to be deported at the end of the single day in which this story takes place. Nicola Yoon delicately incorporates familial and culture issues into this page-turning, will-they-or-won’t-they modern romance.”
— Jessica Perez, University Book Store (Mill Creek), Mill Creek, WA

The #1 New York Times bestseller and National Book Award finalist from the bestselling author of Everything, Everything will have you falling in love with Natasha and Daniel as they fall in love with each other!

Natasha: I’m a girl who believes in science and facts. Not fate. Not destiny. Or dreams that will never come true. I’m definitely not the kind of girl who meets a cute boy on a crowded New York City street and falls in love with him. Not when my family is twelve hours away from being deported to Jamaica. Falling in love with him won’t be my story.

Daniel: I’ve always been the good son, the good student, living up to my parents’ high expectations. Never the poet. Or the dreamer. But when I see her, I forget about all that. Something about Natasha makes me think that fate has something much more extraordinary in store—for both of us.

The Universe: Every moment in our lives has brought us to this single moment. A million futures lie before us. Which one will come true?

"A book that is very much about the many factors that affect falling in love, as much as it is about the very act itself. . . . Fans of Yoon’s first novel, Everything Everything, will find much to love—if not, more—in what is easily an even stronger follow up." —Entertainment Weekly

"Transcends the limits of YA as a human story about falling in love and seeking out our futures." —POPSUGAR.com

Nicola Yoon is the #1 New York Times bestselling author of Everything, Everything, The Sun Is Also a Star and Instructions for Dancing. She is a National Book Award finalist, a Michael L. Printz Honor Book recipient, and a Coretta Scott King New Talent Award winner. Her first two novels have been made into major motion pictures. Nicola grew up in Jamaica and Brooklyn, and lives in Los Angeles with her husband, novelist David Yoon, and their family. She is a hopeless romantic who firmly believes that you can fall in love in an instant and that it can last forever. Together Nicola and David are the co-founders of Joy Revolution, an imprint at Random House Children's Books focused on romance novels by people of color about people of color, inspired by the Yoons' love of romance novels and romantic comedies, and desire from an early age to see themselves—people of color—at the center of these stories. Visit Nicola online at nicolayoon.com and follow @NicolaYoon on Twitter and Instagram.

★ "An exhilarating, hopeful novel exploring identity, family, the love of science and the science of love, dark matter and interconnectedness--is about seeing and being seen and the possibility of love... and it shines." —Shelf Awareness, starred review

★ “Lyrical and sweeping, full of hope, heartbreak, fate. . . and the universal beating of the human heart." —Booklist, starred review

★ "With appeal to cynics and romantics alike, this profound exploration of life and love tempers harsh realities with the beauty of hope in a way that is both deeply moving and satisfying."—Kirkus, starred review

★ “A love story that is smart without being cynical, heartwarming without being cloying, and schmaltzy in all the best ways.”—The Bulletin, starred review

"This wistful love story will be adored by fans of Rainbow Rowell’s Eleanor & Park."—SLJ

“Will give you butterflies.” —Seventeen

“A do-not-miss for fans of John Green and Rainbow Rowell (aka everyone).” —Justine

“YA book lovers, your newest obsession is here.”—MTV.com