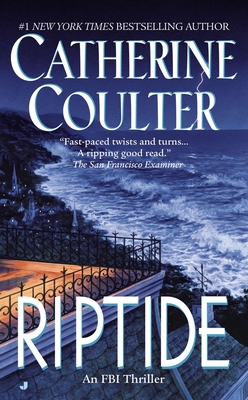 This is book number 5 in the An FBI Thriller series.

A senior speechwriter for the governor of New York, Becca Matlock is at the top of her professional game when she receives a disturbing phone call that threatens everything: “Stop sleeping with the governor or I’ll kill him.” The thing is, she’s not sleeping with her boss, but that fact doesn’t stop the calls from the man who refers to himself as her “boyfriend.”

When her stalker murders an innocent in New York City and the governor is shot in the neck, Becca comes under suspicion and takes off for the sanctuary of Riptide, an isolated community on the coast of Maine. But she soon finds herself at even greater risk...

FBI special agents Savich and Sherlock are in Riptide to help out an old friend of Savich’s father, and soon become embroiled in Becca’s deadly situation. But as enemies new and old circle closer, time is running out for them all.

Catherine Coulter is the #1 New York Times bestselling author of the FBI Thrillers featuring husband and wife team Dillon Savich and Lacey Sherlock. She is also the author—with J. T. Ellison—of the Brit in the FBI series. She lives in Sausalito, California.
Praise for Riptide

“This terrific thriller will drag you into its chilling web of terror and not let go until the last paragraph...The perfect beach book—fast-paced twists and turns driven by believable dialogue between a cast of well-developed characters. A ripping good read.”—The San Francisco Examiner

“All the elements of a real spellbinder: glamour, romance...murder, colorful characters, sinister settings and a hidden motive for revenge that goes back decades. The plot twists at every turn...Excellent.”—The San Diego Union-Tribune

“Plunges ahead at a breathtaking pace...Riptide will be in high demand, and deservedly so.”—Booklist

“[Coulter] successfully layers one mystery atop another, giving away a teaspoon of information at a time.”—The Cincinnati Enquirer

“If there was an award for ‘Thriller of the Year,’ Riptide would win, hands-down.”—The Florida Times-Union (Jacksonville, FL)

“A good storyteller...Coulter always keeps the pace brisk.”—Fort Worth Star-Telegram

“Fast-paced, romantic...Coulter gets better and more cinematic with each of her suspenseful FBI adventures.”—Booklist