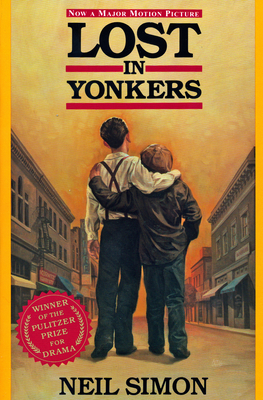 
Email or call for price
Neil Simon’s inimitable play about the trials and tribulations that test family ties—winner of the 1991 Pulitzer Prize for Drama.

What happens to children in the absence of love? That is the question that lies at the heart of this funny and heartrending play by one of America’s most acclaimed and beloved playwrights. Debuting at the Richard Rodgers Theatre in 1990, Lost in Yonkers went on to win four Tony Awards, including Best Play, as well as the Pulitzer Prize, and tells the moving drama about the cruelties and painful memories that scar a family.

It is New York, 1942. After the death of their mother, two young brothers are sent to stay with their formidable grandmother for the longest ten months of their lives. Grandmother Kurnitz is a one-woman German front—a refugee and a widow who has steeled her heart against the world. Her coldness and intolerance have crippled her own children: the boys’ father has no self-esteem; their Aunt Gert has an embarrassing speech impediment; their Uncle Louie is a small-time gangster; and their Aunt Bella has the mentality of a child. But it is Bella's hunger for affection and her refusal to be denied love that saves the boys—and that leads to an unforgettable, wrenching confrontation with her mother. Filled with laughter, tears, and insight, Lost in Yonkers is a heartwarming testament to Neil Simon’s talent.
Since 1960, a Broadway season without a Neil Simon comedy or musical has been a rare one. His first play was Come Blow Your Horn, followed by the musical Little Me. During the 1966-67 season, Barefoot in the Park, The Odd Couple, Sweet Charity, and The Star-Spangled Girl were all running simultaneously; in the 1970-71 season, Broadway theatergoers had their choice of Plaza Suite, Last of the Red Hot Lovers, and Promises, Promises. Next came The Gingerbread Lady, The Prisoner of Second Avenue, The Sunshine Boys, The Good Doctor, God's Favorite, California Suite, Chapter Two, the musical They're Playing Our Song, I Ought to Be in Pictures, Brighton Beach Memoirs (which won the New York Drama Critics' Circle Award for Best Play of 1983), Biloxi Blues (which won the Tony Award for Best Play of 1985), and the female version of The Odd Couple.

Mr. Simon began his writing career in television, writing The Phil Silvers Show and Sid Caesar's Your Show of Shows. He also wrote the screen adaptations of Barefoot in the Park, The Odd Couple, Plaza Suite, The Prisoner of Second Avenue, The Sunshine Boys, California Suite, Chapter Two, and I Ought to Be in Pictures. His original screenplays include The Out-of-Towners, The Heartbreak Kid, Murder by Death, The Goodbye Girl, The Cheap Detective, Seems Like Old Times, Only When I Laugh, Max Dugan Returns, and The Slugger's Wife. He received the Tony Award and the Pulitzer Prize in 1991 for Lost in Yonkers. He died in 2018.
Praise for Neil Simon and Lost in Yonkers

“Neil Simon has done it again, with a craftmanship and skill probably unmatched in the contemporary English-speaking theater.”—Clive Barnes, New York Post

“If Broadway ever erects a monument to a patron saint of laughter, Neil Simon will have to be it.”—Time Magazine