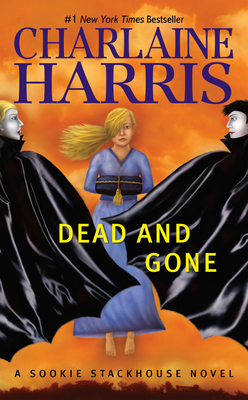 This is book number 9 in the Sookie Stackhouse/True Blood series.

The werewolves and shifters come out of the closet and throw the small town of Bon Temps into a tailspin in the ninth novel in the #1 New York Times bestselling Sookie Stackhouse series—the inspiration for the HBO® original series True Blood.

Except for cocktail waitress Sookie Stackhouse, folks in Bon Temps, Louisiana, knew little about vamps—and nothing about Weres. Until now. The Weres and shifters have finally revealed their existence to the ordinary world, and the backlash may have claimed the life of someone Sookie knew. But her determination to find out who is responsible for the murder is put aside in the face of a far greater danger. A race of unhuman beings—older, more powerful, and more secretive than vampires or werewolves—is preparing for war. And Sookie will find herself an all-too-human pawn in their battle...
Charlaine Harris is the #1 New York Times bestselling author of the Sookie Stackhouse and Midnight, Texas, fantasy/mystery series and the Aurora Teagarden, Harper Connelly, and Lily Bard mystery series. Her books have inspired HBO’s True Blood, NBC’s Midnight, Texas, and the Aurora Teagarden movies for Hallmark Movies & Mysteries. She has lived in the South her entire life.
Praise for #1 New York Times bestselling author Charlaine Harris’s Sookie Stackhouse novels