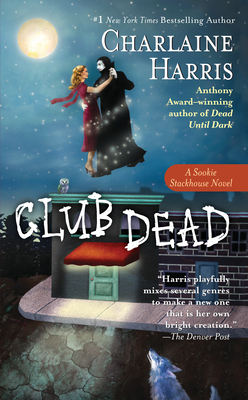 This is book number 3 in the Sookie Stackhouse/True Blood series.

There’s only one vampire Sookie Stackhouse is involved with (at least voluntarily) and it’s Bill Compton. But recently he’s been a little distant—in another state, distant. Then his sinister and sexy boss Eric Northman tells Sookie where she might find him. Next thing she knows, she’s off to Jackson, Mississippi, to mingle with the under-underworld at Club Dead, a dangerous little haunt where the elite of vampire society can go to chill out and suck down some Type-O. But when Sookie finally finds Bill—caught in an act of serious betrayal—she’s not sure whether to save him...or sharpen some stakes.
Charlaine Harris is the #1 New York Times bestselling author of the Sookie Stackhouse and Midnight, Texas, fantasy/mystery series and the Aurora Teagarden, Harper Connelly, and Lily Bard mystery series. Her books have inspired HBO’s True Blood, NBC’s Midnight, Texas, and the Aurora Teagarden movies for Hallmark Movies & Mysteries. She has lived in the South her entire life.
Praise for #1 New York Times bestselling author Charlaine Harris’s Sookie Stackhouse novels