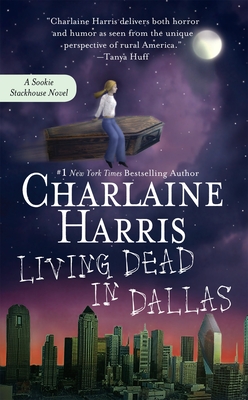 This is book number 2 in the Sookie Stackhouse/True Blood series.

Even though Sookie has her own vampire to look out for her—her red-hot, cold-blooded boyfriend, Bill Compton—she has to admit that the bloodsuckers did save her life. So when one of the local Undead asks the cocktail waitress for a favor, she feels like she owes them.

Soon, Sookie’s in Dallas using her telepathic skills to search for a missing vampire. She’s supposed to interview certain humans involved. There’s just one condition: The vampires must promise to behave—and let the humans go unharmed. Easier said than done. All it takes is one delicious blonde and one small mistake for things to turn deadly...
Charlaine Harris is the #1 New York Times bestselling author of the Sookie Stackhouse and Midnight, Texas, fantasy/mystery series and the Aurora Teagarden, Harper Connelly, and Lily Bard mystery series. Her books have inspired HBO’s True Blood, NBC’s Midnight, Texas, and the Aurora Teagarden movies for Hallmark Movies & Mysteries. She has lived in the South her entire life.
Praise for #1 New York Times bestselling author Charlaine Harris’s Sookie Stackhouse novels