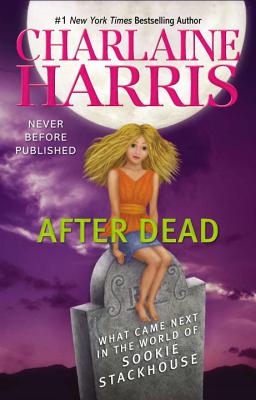 This is book number 14 in the Sookie Stackhouse/True Blood series.

Find out what happened after the conclusion of the #1 New York Times bestselling Sookie Stackhouse series.

Dead Ever After marked the end of the Sookie Stackhouse series—novels that garnered millions of fans and spawned the hit HBO television show True Blood. It also stoked a hunger that will never die…a hunger to know what happened next.

With characters arranged alphabetically—from the Ancient Pythoness to Bethany Zanelli—bestselling author Charlaine Harris takes fans into the future of their favorite residents of Bon Temps and environs. You’ll learn how Michele and Jason’s marriage fared, what happened to Sookie’s cousin Hunter, and whether Tara and JB’s twins grew up to be solid citizens.

This coda provides the answers to your lingering questions—including details of Sookie’s own happily-ever-after...
Charlaine Harris is a New York Times bestselling author for both her Sookie Stackhouse fantasy/mystery series and her Harper Connelly Prime Crime mystery series. She has lived in the South her entire life.

Praise for Charlaine Harris and her Sookie Stackhouse novels

“It’s the kind of book you look forward to reading before you go to bed, thinking you’re only going to read one chapter, and then you end up reading seven.”—Alan Ball on Dead Until Dark

“[An] entertaining series…It[’s] easy to understand why these oddly charming books have become so popular.”—The New Orleans Times-Picayune