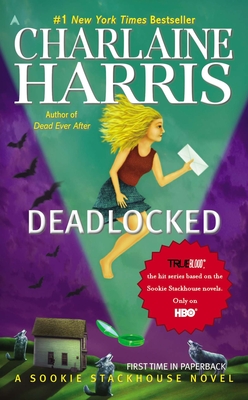 This is book number 12 in the Sookie Stackhouse/True Blood series.

In the penultimate novel in the #1 New York Times bestselling series—the inspiration for the HBO® original series True Blood—Sookie Stackhouse must work with her first love to clear her current undead flame of murder...

Felipe de Castro, the vampire King of Louisiana (and Arkansas and Nevada), is in town. It’s the worst possible time for a human body to show up in Eric Northman’s front yard—especially the body of a woman whose blood he just drank. Now it’s up to Sookie and Bill Compton, the official Area Five investigator, to solve the murder. Sookie thinks that, at least this time, the dead girl’s fate has nothing to do with her. But she is wrong. She has an enemy, one far more devious than she would ever suspect, who has set out to make Sookie’s world come crashing down.
Charlaine Harris is the #1 New York Times bestselling author of the Sookie Stackhouse and Midnight, Texas, fantasy/mystery series and the Aurora Teagarden, Harper Connelly, and Lily Bard mystery series. Her books have inspired HBO’s True Blood, NBC’s Midnight, Texas, and the Aurora Teagarden movies for Hallmark Movies & Mysteries. She has lived in the South her entire life.
Praise for #1 New York Times bestselling author Charlaine Harris’s Sookie Stackhouse novels