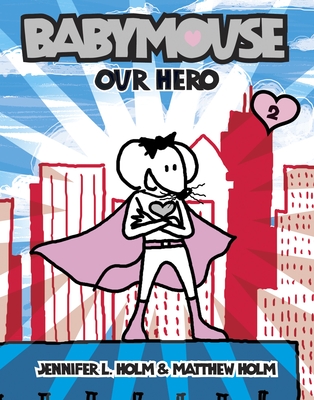 This is book number 2 in the Babymouse series.

Meet Babymouse--the spunky mouse beloved by young readers for more than a decade! Babymouse faces her biggest challenge yet—the annual school dodgeball tournament. Will she be able to dodge her way to victory? This groundbreaking young graphic novel series, full of humor and fun, is a bestseller that’s sold more than three million copies!

It's a bird! It's a plane! It's a... Babymouse? School is a constant battle between good (Babymouse), evil (Felicia Furrpaws), and more evil (gym class!). Can things get any worse? Yup. Because it’s time for the annual dodgeball tournament. What’s a mouse to do? Don’t miss the excitement in Our Hero—the 2nd hilarious, action-packed installment of the beloved Babymouse graphic novel series!

DON'T MISS The BIG Adventures of Babymouse: Once Upon a Messy Whisker, the newest, brightest, and BIGGER THAN EVER graphic novel from BABYMOUSE!
Brother-and-sister team Matthew Holm and Jennifer L. Holm grew up playing with stuffed mice. Jennifer is the New York Times bestselling author of several highly acclaimed novels, including three Newbery Honor-winners, Our Only May Amelia, Penny from Heaven, and Turtle in Paradise.
Here's what people are saying about Babymouse!

"Nobody puts Babymouse in the corner!" —The Horn Book, Starred Review

"Cute, smart, sassy Babymouse is fun and funny, and this book, like its predecessors, will draw reluctant readers as well as Babymouse fans."—Booklist