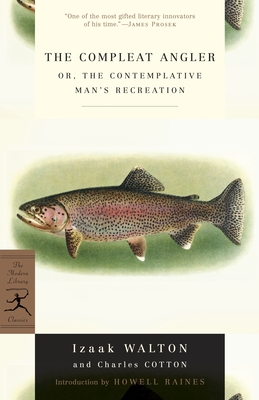 
On Our Shelves Now
An immediate success when if was first published in 1653, Walton's classic celebrtion of the joys of fishing continues to captivate anglers and nature lovers with its timeless advice and instruction.  Originally cast in the form of a dialogue between an experienced angler named Piscator and his pupil Viator, the book details methods for catching, eating, and savoring all varieties of fish, from the common chub to the lordly salmon. More than an engaging guide to the subtle intricacies of the sport, Walton's reflective treatise is a graceful portrait of rural England that extols the pleasures of country life.

'The Compleat Angler is not about how to fish but about how to be,' said novelist Thomas McGuane. '[Walton] spoke of an amiable mortality and rightness on the earth that has been envied by his readers for three hundred years.'
Izaak Walton, one of the earliest English biographers, is best remembered as the author of The Compleat Angler. In 1676 Walton asked a young follower, the poet Charles Cotton, to furnish a supplement on fly-fishing for the fifth edition of the book, a project that the two pursued at a cottage on the banks of the Dove River in Derbyshire.

Charles Cotton (1630–1687) was a country gentleman, poet, and translator, who built a fishing house for himself and Izaak Walton at his birthplace, Beresford Hall in Staffordshire. In 1676, at Walton's invitation, he wrote the second part to The Compleat Angler.

Before stepping down in 2003, Howell Raines was executive editor of The New York Times. He is the author of Whiskey Man, a novel, and My Soul Is Rested, an oral history of the Civil Rights movement. He was awarded the Pulitzer Prize for feature writing in 1992.