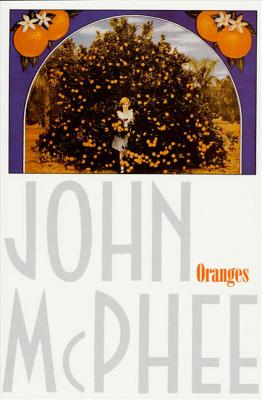 A classic of reportage, Oranges was first conceived as a short magazine article about oranges and orange juice, but the author kept encountering so much irresistible information that he eventually found that he had in fact written a book. It contains sketches of orange growers, orange botanists, orange pickers, orange packers, early settlers on Florida's Indian River, the first orange barons, modern concentrate makers, and a fascinating profile of Ben Hill Griffin of Frostproof, Florida who may be the last of the individual orange barons. McPhee's astonishing book has an almost narrative progression, is immensely readable, and is frequently amusing. Louis XIV hung tapestries of oranges in the halls of Versailles, because oranges and orange trees were the symbols of his nature and his reign. This book, in a sense, is a tapestry of oranges, too—with elements in it that range from the great orangeries of European monarchs to a custom of people in the modern Caribbean who split oranges and clean floors with them, one half in each hand.

John McPhee was born in Princeton, New Jersey, and was educated at Princeton University and Cambridge University. His writing career began at Time magazine and led to his long association with The New Yorker, where he has been a staff writer since 1965. Also in 1965, he published his first book, A Sense of Where You Are, with Farrar, Straus and Giroux, and in the years since, he has written over 30 books, including Oranges (1967), Coming into the Country (1977), The Control of Nature (1989), The Founding Fish (2002), Uncommon Carriers (2007), and Silk Parachute (2011). Encounters with the Archdruid (1972) and The Curve of Binding Energy (1974) were nominated for National Book Awards in the category of science. McPhee received the Award in Literature from the Academy of Arts and Letters in 1977. In 1999, he was awarded the Pulitzer Prize for Annals of the Former World. He lives in Princeton, New Jersey.

“Fascinating. A sterling example of what a fresh point of view, a clear style, a sense of humor and diligent investigation can do to reveal the inherent interest in something as taken-for-granted as your morning orange juice.” —Edmund Fuller, The Wall Street Journal

“It is a delicious book, in a word, and more absorbing than many a novel.” —Roderick Cook, Harper's