Fierce: How Competing for Myself Changed Everything (Hardcover) 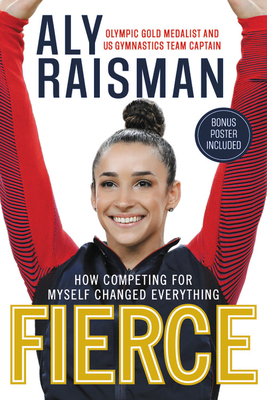 Fierce: How Competing for Myself Changed Everything (Hardcover)


Email or call for price
Discover Aly Raisman's inspiring story of dedication, perseverance, and learning to think positive even in the toughest times on her path to gold medal success in two Olympic Games--and beyond.

Aly Raisman first stepped onto a gymnastics mat as a toddler in a "mommy & me" gymnastics class. No one could have predicted then that sixteen years later, she'd be standing on an Olympic podium, having achieved her dreams.

Aly's road to success was full of hard work, perseverance, and victories, but not without its hardships. Aly faced many obstacles, from naysayers who said she'd never make it in gymnastics to classmates who shamed her for her athletic body to a devastating betrayal of trust. Through it all, Aly surrounded herself with supportive family, friends, and teammates and found the inner strength to remain positive and believe in herself. Now, in her own words, Aly shows what it takes to be a champion on and off the floor, and takes readers on a behind-the-scenes journey before, during, and after her remarkable achievements in two Olympic Games--through her highest highs, lowest lows, and all the moments in between.

Honest and heartfelt, frank and funny, Aly's story is enhanced with never-before-published photos, excerpts from the personal journals she's kept since childhood that chronicle memorable moments with her teammates, and hard-won advice for readers striving to rise above challenges, learn to love themselves, and make their own dreams come true.

Aly Raisman is a gold-medal-winning Olympic gymnast who captained the U.S. team to victories in 2012 and 2016. She has won six Olympic medals overall, and was a member of two gold-medal-winning World Championships teams. A native of Needham, Massachusetts, Aly's love for the sport can be traced back to a "mommy & me" gymnastics class she took as an eighteen-month-old. Aly is a leader on and off the floor, and a fierce advocate for body positivity.
A New York Times Bestseller
An Entertainment Weekly Best YA book of 2017
"Aly Raisman is fierce in every sense of the word. Her story is one of persistence, hardship, triumph and leadership and Fierce is both inspiring and illuminating."—Billie Jean King, Founder, Women's Sports Foundation

"Aly's success as a gymnast is no doubt incredible. But Fierce gives an intimate look into her journey not just as an athlete, but as an impressive and powerful young woman. She's a role model to our daughters, an incredible friend, and the embodiment of bravery and girl power!"—Nick Swisher and JoAnna Garcia Swisher

"...an accessible memoir, of an inspirational bent...with some vital, tender discussion of her experience of sexual assault included as well. It's a book of (appropriately) fierce advocacy."
—Entertainment Weekly

"...lively and straightforward...Raisman's inspiring and enlightening story belongs in every teen biography collection."—SLJ