Come From Away: Welcome to the Rock: An Inside Look at the Hit Musical (Hardcover) 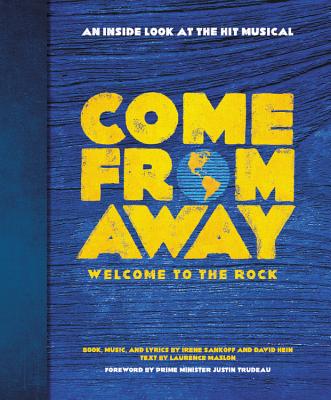 Come From Away: Welcome to the Rock: An Inside Look at the Hit Musical (Hardcover)


Usually Ships in 1-5 Days
Come From Away: Welcome to the Rock - a fully illustrated companion volume to the hit Tony Award-winning Broadway musical, featuring the book and lyrics for the first time in print, backstage stories and the real history behind the show's events, character design sketches, and songs that ended up on the cutting room floor.

The Tony Award-winning Broadway musical Come From Away tells the remarkable true story of a small town that welcomed the world. On September 11, 2001, 38 planes and 6,579 passengers were forced to land in the provincial town of Gander, Newfoundland. The local residents opened their arms to the displaced visitors, offering food, shelter, and friendship. In the days that followed, cultures clashed and nerves ran high, but uneasiness turned into trust, music soared into the night, and gratitude grew into enduring friendships.

Come From Away: Welcome to the Rock is the ultimate companion piece to Irene Sankoff and David Hein's smash-hit musical based on that extraordinary experience. Featuring the complete book and lyrics for the first time in print, a foreword by Canadian Prime Minister Justin Trudeau, and exclusive photos of the company and physical production, this essential companion also includes original interviews with passengers, Gander residents, and the actors who portray them. The narrative by theater historian Laurence Maslon details the events of that memorable and challenging week and also traces the musical's development from the ten-year reunion of residents and airline passengers in Gander, where the idea for the musical was born , to the global phenomenon it is today.

Come From Away: Welcome to the Rock gives an unprecedented look behind the curtain and demonstrates why the story has touched so many so deeply: Because we come from everywhere, we all come from away.

Laurence Maslon (Text) is an arts professor at New York University's Graduate Acting Program. He hosts the weekly radio program, "Broadway to Main Street" and has written for several PBS documentary series, including American Masters, and authored a dozen books, including most recently Broadway to Main Street: How Show Tunes Enchanted America. He served on the nominating committee for the Tony Awards from 2007 to 2010 and has written for the New York Times, the New Yorker, Playbill, HuffPost, and more.

"The catharsis we need in this American moment."—Ben Brantley, The New York Times

"It does what all the best musicals do. Takes you to a place you never want to leave."—Joe Westerfield, Newsweek

"NOT JUST A SPARK OF LIGHT IN A DARK TIME - IT'S A SPOTLIGHT OF BLAZINGLY BRIGHT PROPORTIONS. I CAN'T IMAGINE A MUSICAL WE NEED MORE RIGHT NOW.... TRULY REMARKABLE! GLORIOUS AND LIFE-AFFIRMING!"
—Entertainment Weekly

"This miraculous masterpiece is totally, soul-feedingly wonderful.... A beautifully crafted hymn to the power of community."
—Time Out

"Irresistible and inspiring. It takes all of ten seconds to be in this show's generous embrace.... It's a musical that gets everything right."
—The Times

"This is the show we all need right now."—The Sunday Times

"THIS STORY TOUCHED THE WORLD AND CELEBRATES THE BEST THAT WE CAN ALL BE. It speaks to what people really feel in their hearts. I've seen Come From Away twice and I'm still very moved by it. We need it, especially right now.—Tom Brokaw, NBC News

"This timeless and emotionally fulfilling musical by Irene Sankoff and David Hein is a celebration of hope and optimism."—Johnny Oleksinski, New York Post

"AN EFFERVESCENT MUSICAL ANTIDOTE FOR WHAT AILS THE AMERICAN SOUL."—Peter Marks, Washington Post

"A PHENOM ON BROADWAY AND ABROAD! OPENHEARTED AND EXHILARATING."—Misha Berson, The Seattle Times

"As beautifully and thoughtfully crafted as the show itself.... A must-read for any "islanders": a stirring companion to a remarkable production, and further accounts of the best of humanity - which light up the darkest times."—BroadwayWorld.com

"This hefty hardcover delivers an authentic backstage view....Maslon puts the story in context with historical text, interviews and photos. Not a snoozy cod in the bunch here, b'y....This book will be the ultimate book for the "come from away-ers" and musical theatre fans on your gift list."
—Winnipeg Free Press