"When Did You See Her Last?" (All the Wrong Questions #2) (Paperback) 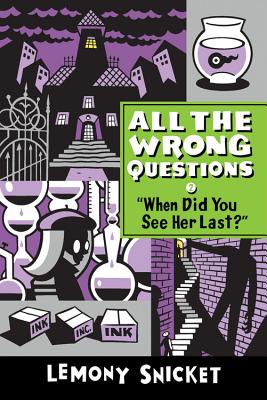 "When Did You See Her Last?" (All the Wrong Questions #2) (Paperback)


Usually Ships in 1-5 Days
Before the Baudelaires became orphans, before he encountered A Series of Unfortunate Events, even before the invention of Netflix, Lemony Snicket was a boy discovering the mysteries of the world.

I should have asked the question "How could someone who was missing be in two places at once?" Instead, I asked the wrong question -- four wrong questions, more or less. This is the account of the second.

In the fading town of Stain'd-by-the-Sea, young apprentice Lemony Snicket has a new case to solve when he and his chaperone are hired to find a missing girl. Is the girl a runaway? Or was she kidnapped? Was she seen last at the grocery store? Or could she have stopped at the diner? Is it really any of your business? These are All The Wrong Questions.

Lemony Snicket had an unusual education and a perplexing youth and now endures a despondent adulthood. His previous published works include All the Wrong Questions, the thirteen volumes in A Series of Unfortunate Events, The Composer is Dead, and 13 Words.
"The author's trademark wit and talent for sustaining suspense make this fast-paced, noir mystery a fun choice for kids who enjoy a good whodunit."—School Library Journal

"Reading this second adventure is like playing a combination of Clue and a children's literature version of Trivial Pursuit."—The Horn Book

"Chock-full of linguistic play and literary allusions to children's and classic literature, this is adventure mystery for young readers who like to think as they read."—Kirkus