"Who Could That Be at This Hour?": Also Published as "All the Wrong Questions: Question 1" (Paperback) 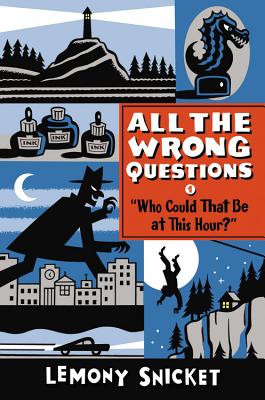 "Who Could That Be at This Hour?": Also Published as "All the Wrong Questions: Question 1" (Paperback)

“Snicket's eccentric characters, gloomy settings, and twisted plots are back in full force. Thirteen-year-old Lemony is already suspicious, worried, and over his head in secrets. He is apprenticed to S. Theodora Markson (asking what the S stands for is a Wrong Question), who is taking him to Stain'd-by-the-Sea, a thoroughly strange place with lots of its own secrets. Markson and Snicket are there to do one thing: retrieve and return a statue of the rather frightening Bombinating Beast to its rightful owner. Nothing is as simple as it seems, especially when you can't trust anyone. Snicket knows much more than he's telling, and he weaves a complex mystery that ultimately brings up more questions than it answers.”
— Marika McCoola, Odyssey Bookshop, South Hadley, MA

Before the Baudelaires became orphans, before he encountered A Series of Unfortunate Events, even before the invention of Netflix, Lemony Snicket was a boy discovering the mysteries of the world.

In a fading town, far from anyone he knew or trusted, a young Lemony Snicket began his apprenticeship in an organization nobody knows about. He started by asking questions that shouldn't have been on his mind. Now he has written an account that should not be published, in four volumes that shouldn't be read. This is the first volume.
Lemony Snicket had an unusual education and a perplexing youth and now endures a despondent adulthood. His previous published works include All the Wrong Questions, the thirteen volumes in A Series of Unfortunate Events, The Composer is Dead, and 13 Words.
A Kirkus Best Book of the YearA School Library Journal Best Book of the YearA New York Times Notable Children's Book of the Year

* "[With] gothic wackiness, linguistic play and literary allusions....Fans of the Series of Unfortunate Events will be in heaven picking out tidbit references to the tridecalogy, but readers who've yet to delve into that well of sadness will have no problem enjoying this weird and witty yarn."—Kirkus Reviews, starred review

* "Full of Snicket's trademark droll humor and maddeningly open-ended, this will have readers clamoring for volume two."—Publishers Weekly, starred review

* "Will thrill fans of the author's earlier works and have even reluctant readers turning pages with the fervor of seasoned bookworms. A must-have."—School Library Journal, starred review

"Demands to be read twice: once for the laughs and the second time for the clues....Equal parts wit and absurdity."—The Boston Globe

"The sort of goodie savored by brainy kids who love wordplay, puzzles and plots that zing from point A to B by way of the whole alphabet."—The Washington Post