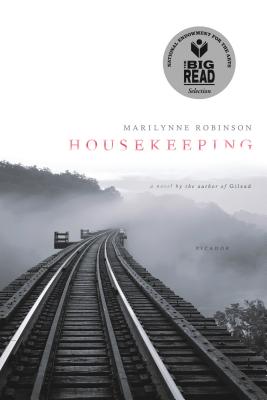 Winner of the Pen/Hemingway Award

A modern classic, Marilynne Robinson's Housekeeping is the story of Ruth and her younger sister, Lucille, who grow up haphazardly, first under the care of their competent grandmother, then of two comically bumbling great-aunts, and finally of Sylvie, the eccentric and remote sister of their dead mother.

The family house is in the small town of Fingerbone on a glacial lake in the Far West, the same lake where their grandfather died in a spectacular train wreck and their mother drove off a cliff to her death. It is a town "chastened by an outsized landscape and extravagant weather, and chastened again by an awareness that the whole of human history had occurred elsewhere."

Ruth and Lucille's struggle toward adulthood beautifully illuminates the price of loss and survival, and the dangerous and deep undertow of transcience.

Marilynne Robinson is the recipient of a 2012 National Humanities Medal, awarded by President Barack Obama, for "her grace and intelligence in writing." She is the author of Gilead, winner of the 2005 Pulitzer Prize for Fiction and the National Book Critics Circle Award; Home, winner of the Orange Prize and the Los Angeles Times Book Prize; and Lila, winner of the National Book Critics Circle Award. Her first novel, Housekeeping, won the Hemingway Foundation/PEN Award. Robinson's nonfiction books include The Givenness of Things, When I Was a Child I Read Books, Absence of Mind, The Death of Adam, and Mother Country. She lives in Iowa City, Iowa.

“So precise, so distilled, so beautiful that one doesn't want to miss any pleasure it might yield.” —Le Anne Schreiber, The New York Times Book Review

“Here's a first novel that sounds as if the author has been treasuring it up all her life...You can feel in the book a gathering voluptuous release of confidence, a delighted surprise at the unexpected capacities of language, a close, careful fondness for people that we thought only saints felt.” —Anatole Broyard, The New York Times

“I found myself reading slowly, than more slowly--this is not a novel to be hurried through, for every sentence is a delight.” —Doris Lessing