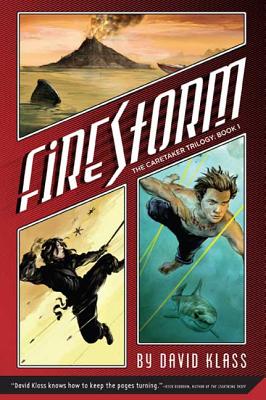 This is book number 1 in the Caretaker Trilogy series.

His mother is not his mother. His father is not his father. But if Jack hadn't broken the high school rushing record that night, he never would have known and nothing would have changed. He'd just be going out for pizza, playing football, trying yet again to score with his girlfriend, P.J. But he did break the record. He appeared on the news. And now they've found him.

Jack plunges into a space-time–bending game of survival with no way out. The rules are shrouded in secrets. But one thing he learns fast: Trust no one. After centuries of abuse, the earth is dying, and it's up to Jack to reverse the decline before the Turning Point, when nothing will ever be the same again.

Beaten into shape by a ninja babe and a huge telepathic man's best friend, Jack hurtles across the ocean to save the future from the present and to solve the mystery of his purpose. Exactly who, or what, is Firestorm, and what does it have to do with Jack? And what comes next when everything you have ever known turns out to be wrong?

In the first book of the Caretaker Trilogy, readers are taken on an electrifying, fast-paced adventure of hunting truth, all in the name of staying alive.

David Klass is the author of many young adult novels, including You Don't Know Me, Losers Take All, and Grandmaster. He is also a Hollywood screenwriter, having written more than twenty-five action screenplays, including Kiss the Girls, starring Morgan Freeman and Ashley Judd, Walking Tall, starring The Rock, and Desperate Measures, starring Michael Keaton and Andy Garcia. Klass grew up in a family that loved literature and theater-his parents were both college professors and writers-but he was a reluctant reader, preferring sports to books. But he started loving the adventure stories his parents would bring home from the library-particularly Jack London, Robert Louis Stevenson and Alexandre Dumas. After his sister twice won a story contest in Seventeen magazine, Klass decided he would win it too, and when he was a senior in high school, he did, publishing his first story, "Ringtoss," in the magazine. He studied at Yale University, where he won the Veech Award for Best Imaginative Writing. He taught English in Japan, and wrote his first novel, The Atami Dragons, about that experience. He now lives in New York with his wife and two children.

“Klass enters exciting and provocative new territory with this sci-fi thriller. The cliff-hanger ending will make readers hope that Klass's work on book two of the trilogy is well under way.” —Starred, School Library Journal

“Gripping. A total thrill ride, one with a profound message.” —Starred, Publishers Weekly

“Firestorm is a potent mixture of high-octane YA novel and sensitive, intelligent study of the current environmental crises facing the planet.” —Kirkus Reviews Big Book Preview

“Readers will relish hurtling through the adventure alongside Jack.” —The Bulletin of the Center for Children's Books

“Firestorm is a gripping tale of the relentless and unnecessary harm we humans have done to our earth, and a reminder that there is still hope for our planet if each person stands up and acts in its defense before it is too late. This is a book every environmentally conscious school science program should make required reading.” —Gerd Leipold, Executive Director, Greenpeace International

“Klass has scored a hat trick with Firestorm--incredibly original, vitally important, and one hell of a ride.” —David Baldacci, author of The Camel Club