That All Shall Be Saved: Heaven, Hell, and Universal Salvation (Hardcover) 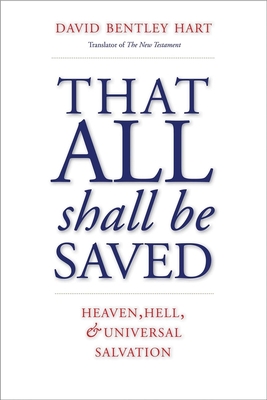 That All Shall Be Saved: Heaven, Hell, and Universal Salvation (Hardcover)

“A scathing, vigorous, eloquent attack on those who hold that that there is such a thing as eternal damnation.”—Karen Kilby, Commonweal

“[A] provocative, informative treatise. . . . [Hart’s] resounding challenge to orthodox Christian views on hell and his defense of God’s ultimate goodness will prove convincing and inspiring to the open-minded.”—Publishers Weekly (starred review)

The great fourth-century church father Basil of Caesarea once observed that, in his time, most Christians believed that hell was not everlasting, and that all would eventually attain salvation. But today, this view is no longer prevalent within Christian communities.

In this momentous book, David Bentley Hart makes the case that nearly two millennia of dogmatic tradition have misled readers on the crucial matter of universal salvation. On the basis of the earliest Christian writings, theological tradition, scripture, and logic, Hart argues that if God is the good creator of all, he is the savior of all, without fail. And if he is not the savior of all, the Kingdom is only a dream, and creation something considerably worse than a nightmare. But it is not so. There is no such thing as eternal damnation; all will be saved. With great rhetorical power, wit, and emotional range, Hart offers a new perspective on one of Christianity’s most important themes.
David Bentley Hart is an Eastern Orthodox scholar of religion, and a philosopher, writer, and cultural commentator. His books include The Experience of God and The New Testament: A Translation.
“Hart…has an octopus-like grip on contemporary culture, history and theology, as well as a vibrant, vocabulary-rich style.”—Nick Mattiske, Insights

“[A] provocative, informative treatise. . . . [Hart’s] resounding challenge to orthodox Christian views on hell and his defense of God’s ultimate goodness will prove convincing and inspiring to the open-minded.”—Publishers Weekly (starred review)

“An important book . . . a timely, and at times quite personal, reflection on a critical topic, replete with incisive theological and metaphysical insights and astringent polemic . . . Hart is a formida­ble thinker.”—Fr Aidan (Alvin) Kimel, Eclectic Orthodoxy

“Simultaneously wide-sweeping and combative . . . Hart’s argument is forceful, analytically clear, and compelling . . . Hart has written another provocative work which should rightly be taken up, read, debated, and prayed through.”—Myles Werntz, In All Things

“A wonderful gift . . . Hart challenges Christians to consider the ways we've yielded to self-absorption or failed to display empathy when conceptualizing eternity. In exploring these questions, we have an opportunity to become a little more like Christ.”—Jon Carlson, Evangelicals for Social Action

“[Hart] has established himself as one of the best theologians writing in English today and as hands down the best writer among contemporary Anglophone theologians.”—Nicholas Frankovich, National Review

“[A] stunningly strong attack on the idea of eternal torment . . . Bracing in the extreme—a sturdy assault on an unappealing doctrine using vivid language and wide learning.”—Dwight A. Moody, The Meetinghouse

“The work of a stirred and unyielding conscience . . . As much as the prophets, Hart thunders against the corrosive effects of Christianities rendered cruel through their incoherence . . . His is an argument that, frankly, I find irrefutable.”—Jason Micheli, Christian Century

“What That All Shall Be Saved demands of us is that we take Christianity at its radical word.”—Ed Simon, Los Angeles Review of Books

“A scathing, vigorous, eloquent attack on those who hold that that there is such a thing as eternal damnation . . . a forceful intervention that may usefully rebalance the debate.”—Karen Kilby, Commonweal

“Hart [is] essential reading for anyone, of any faith or none, who laments the rightward drift of American Christianity . . . Hart’s profound immersion in the Greek of the New Testament has convinced him that its message is one of social as well as spiritual emancipation.”—Michael Robbins, Bookforum

“Hart successfully identifies the crucial questions which the doctrine of hell raises. His theological arguments are clear, thought-provoking, and more than worthy of a response from infernalists.”—Daniel Waldow, Journal of Moral Theology

“David Bentley Hart never disappoints. Three years ago he published a translation of the New Testament; now comes a “companion” to take up a question that vexes many Christians. Does the New Testament teach that hell is everlasting? Hart is convinced, having wrestled with the language of the New Testament and plumbed early Christian thought, that it does not. In this original and lively book, Hart shows, why most Christian thinking about eternal damnation is unbiblical.”—Robert Louis Wilken, author of Liberty in the Things of God

“Hart shows with great clarity why the idea that our ultimate freedom lies in accepting or rejecting God as one option amongst others is profoundly mistaken. This is some of the most exacting, perspicuous and powerful theological writing I have read in recent years.”—Simon Oliver, Durham University

“If everything and everyone are not finally restored, then God is not God. This is the simple core of Hart’s unanswerable argument, masterfully developed. He calls us back to real orthodoxy, perhaps just in time.”—John Milbank, University of Nottingham

"At last! A brilliant treatment—exegetically, theologically, and philosophically— of the promise that, in the end, all will indeed be saved, and exposing the inadequacy—above all moral—of claims to the contrary.”—John Behr, St. Vladimir's Orthodox Theological Seminary

“David Bentley Hart, the most eminent living anglophone theologian, asks the fundamental question: Is it possible that anyone is damned? Hart’s answer is no, and that negative is gorgeously elaborated in this book, with unmatched force and brio.”—Paul Griffiths, author of Christian Flesh