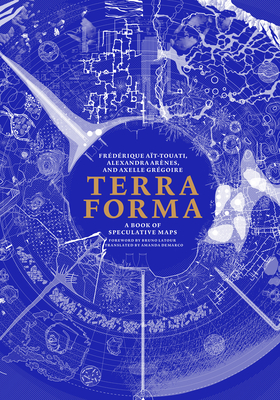 
On Our Shelves Now
Charting the exploration of an unknown world—our own—with a new cartography of living things rather than space available for conquest or colonization.

This book charts the exploration of an unknown world: our own. Just as Renaissance travelers set out to map the terra incognito of the New World, the mapmakers of Terra Forma have set out to rediscover the world that we think we know. They do this with a new kind of cartography that maps living things rather than space emptied of life and available to be conquered or colonized. The maps in Terra Forma lead us inward, not off into the distance, moving from the horizon line of conventional cartography to the thickness of the ground, from the global to the local.

Each map in Terra Forma is based on a specific territory or territories, and each tool, or model, creates a new focal point through which the territory is redrawn. The maps are “living maps,” always under construction, spaces where stories and situations unfold. They may map the Earth’s underside rather than its surface, suggest turning the layers of the Earth inside out, link the biological physiology of living inhabitants and the physiology of the land, or trace a journey oriented not by the Euclidean space of GPS but by points of life. These speculative visualizations can constitute the foundation for a new kind of atlas.
Frédérique Aït-Touati is a science historian, theater director, and Research Fellow at the CNRS (French National Centre for Scientific Research). Alexandra Arènes is a landscape architect working on a project in Gaia-graphy at the University of Manchester. Axelle Grégoire is an architect who has worked in urban planning and on experimental transdisciplinary research projects on the city.