Deep-Sky Wonders: A Tour of the Universe with Sky and Telescope's Sue French (Paperback) 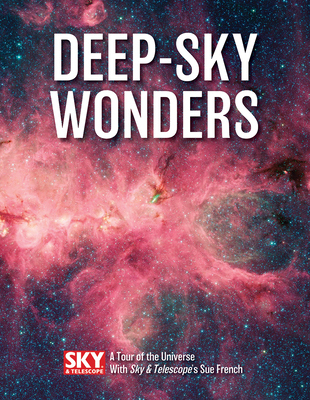 Deep-Sky Wonders: A Tour of the Universe with Sky and Telescope's Sue French (Paperback)

The quality of the deep-sky images is outstanding--a tribute to the various photographers as well as the book's printer. But it's the written word that will make or break a book like this, and Sue's writing is superb... For] an occasional stargazer, a serious observer, or anyone in between, you won't go wrong with Deep-Sky Wonders. This is a great introduction to deep-sky stargazing for novice and experienced amateur astronomers alike.
--Mercury, publication of the Astronomical Society of the Pacific

Sue French writes the popular column Deep-Sky Wonders for Sky and Telescope magazine and also teaches deep sky observation. She has earned a loyal following among enthusiasts and is welcomed by beginners for her skill at presenting astronomy in an understandable way. After selling 10,000 copies of Deep-Sky Wonders in hardcover, we expect a good response for this paperback edition at an accessible price.

Deep-Sky Wonders is a collection of 100 of French's best Deep-Sky Wonders columns originally published in Sky and Telescope, which has a monthly readership exceeding 100,000. The book is organized by season and subdivided into months for a total of 100 in-depth tours of the deep sky. Each deep sky tour illuminates little-known seasonal wonders that lie off the beaten path.

Deep-Sky Wonders also features a variety of challenging objects that encourage observers to test the limits of their equipment and skills. Suitable for beginner and intermediate small-scope astronomers as well as large-scope viewers and astrophotographers, this book will be greeted enthusiastically by all Sky and Telescope readers. It is also an outstanding introduction to deep-sky viewing for novice observers.

Sue French has an Associate's Degree in physics and has been an avid deep-sky observer for 43 years. She worked as a planetarium educator for 21 years and, among numerous other astronomy activities, board memberships, lectures and teaching, French has been a contributing editor and monthly columnist for Sky and Telescope magazine since 1997, where she is best known for her observing and review articles. French lives near Schenectady, New York, but travels regularly to enjoy the deep sky from different vantage points. She and her husband, Alan, received the Astronomical League award for outstanding contributions to astronomy and have asteroid 17638 Sualan named for them.