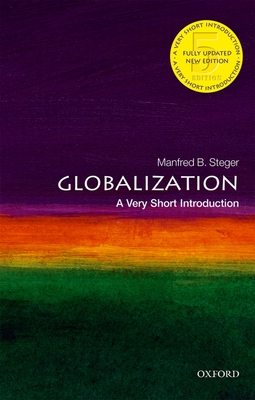 By Manfred B. Steger


Usually Ships in 1-5 Days
We live today in an interconnected world in which ordinary people can became instant online celebrities to fans thousands of miles away, in which religious leaders can influence millions globally, in which humans are altering the climate and environment, and in which complex social forces intersect across continents. This is globalization. In the fifth edition of his bestselling Very Short Introduction Manfred B. Steger considers the major dimensions of globalization: economic, political, cultural, ideological, and ecological. He looks at its causes and effects, and engages with the hotly contested question of whether globalization is, ultimately, a good or a bad thing. From climate change to the Ebola virus, Donald Trump to Twitter, trade wars to China's growing global profile, Steger explores today's unprecedented levels of planetary integration as well as the recent challenges posed by resurgent national populism. ABOUT THE SERIES:
The Very Short Introductions series from Oxford University Press contains hundreds of titles in almost every subject area. These pocket-sized books are the perfect way to get ahead in a new subject quickly. Our expert authors combine facts, analysis, perspective, new ideas, and enthusiasm to make interesting and challenging topics highly readable.

Manfred B. Steger is Professor of Sociology at the University of Hawai'i-Manoa and Global Professorial Fellow at Western Sydney University. He also served as a globalization consultant for the U.S. Department of State. He is the author or editor of twenty-seven books on globalization and social theory, including The Rise of the Global Imaginary (Oxford University Press, 2008); the award-winning Globalisms: Facing the Populist Challenge, 4th ed. (Rowman & Littlefield, 2020); and Globalization Matters: Engaging the Global in Unsettled Times (with Paul James, Cambridge University Press, 2019).