A Journey To The End Of The Millennium (Paperback) 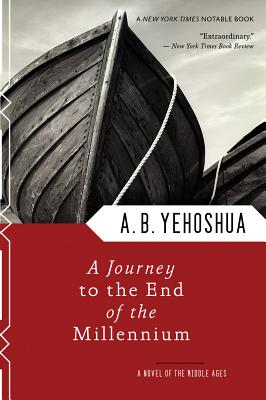 A Journey To The End Of The Millennium (Paperback)


Usually Ships in 1-5 Days
In the year 999, when Ben Attar, a Moroccan Jewish merchant, takes a second wife, he commits an act whose unforeseen consequences will forever alter his family, his relationships, his business-his life. In an attempt to forestall conflict and advance his business interests at the same time, Ben Attar undertakes his annual journey to Europe with both his first wife and his new wife. The trip is the beginning of a profound human drama whose moral conflicts of fidelity and desire resonate with those of our time. Yehoshua renders the medieval world of Jewish and Christian culture and trade with astonishing depth and sensuous detail. Through the trials of a medieval merchant, the renowned author explores the deepest questions about the nature of morality, character, codes of human conduct, and matters of the heart.

A. B. YEHOSHUA (1936-2022) was born in Jerusalem to a Sephardi family. Drawing comparisons to William Faulkner and described by Saul Bellow as “one of Israel's world-class writers”, Yehoshua, an ardent humanist and titan of storytelling, distinguished himself from contemporaries with his diverse exploration of Israeli identity. His work, which has been translated into twenty-eight languages, includes two National Jewish Book Award winners (Five Seasons and Mr. Mani) and has received countless honors worldwide, including the International Booker Prize shortlist and the Los Angeles Times Book Prize (Woman in Jerusalem).

"Extraordinary . . . Yehoshua is so graceful and eloquent that his work's timeliness also succeeds, paradoxically, in making it timeless."-The New York Times Book Review
"An immensely intelligent, humane book . . . A. B. Yehoshua is a world-class writer at the height of his powers."-The Boston Globe
"Wherever this innovative, erudite, suggestive, mysterious writer-a true master of contemporary fiction-points us, there can be no doubt, it is essential that we go."-Neil Gordon, the Washington Post
—