The State of the World Atlas: Tenth Edition (Paperback) 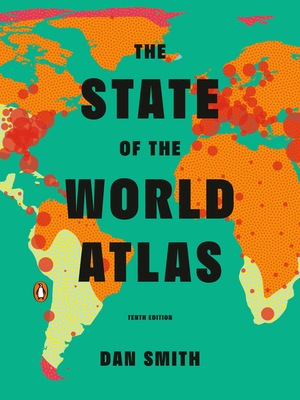 The State of the World Atlas: Tenth Edition (Paperback)


On Our Shelves Now
The State of the World Atlas is an accessible, unique visual survey of current events and global trends, highlighting the international scope and complexity of many challenges facing the humanity today. With a bold new design, this distinctive atlas presents the latest statistics on international trade and migration, the globalization of work, aging and new health risks (up to and including the COVID-19 pandemic), food and water, energy resources and consumption, literacy, gender equality, wars and peacekeeping, and more. And for the newest edition, special attention has been brought to the way that all of these issues are affected by the ongoing climate crisis. Fascinating, troubling, and surprising, this is an important resource for anyone who seeks to better understand the world around them.
Dan Smith is Secretary General of International Alert, based in London, and former Director of the International Peace Research Institute, Oslo (PRIO). In 2007-2011 he was Chairman of the UN Peacebuilding Fund Advisory Group. In 2002 he was awarded an OBE. He is also author of The Atlas of War and Peace and The State of the Middle East.
Praise for previous editions:

“The State of the World Atlas is something else – an occasion of wit and an act of subversion…These are the bad dreams of the modern world, given color and shape and submitted to a grid that can be grasped instantaneously.” —New York Times

“Unique and uniquely beautiful...a discerning eye for data and a flair for the most sophisticated techniques of stylized graphic design; the atlas succeeds in displaying the geopolitical subtleties of global affairs in a series of dazzling color plates…tells us more about the world today than a dozen statistical abstracts or scholarly tomes.” —Los Angeles Times

“Coupled with an unusual non-distorting map projection and a series of brilliant cartographic devices, this gives a positively dazzling set of maps. It deserves to be widely used.” —New Society

“A super book that will not only sit on your shelf begging to be used, but will also be a good read. To call this book an atlas is like calling Calvados, applejack – it may be roughly accurate but it conveys nothing of the richness and flavour of the thing. Its inventive brilliance deserves enormous rewards.” —New Scientist

“Outspoken cataloguing of global oppressions and inequities, painstakingly sourced.” Independent on Sunday “Packed with fascinating facts and figures on everything from the international drugs industry to climate change.” —Evening Standard