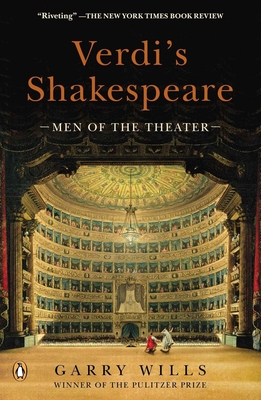 This dazzling study of the three operas that Giuseppe Verdi adapted from Shakespeare's plays takes readers on a wonderfully engaging journey through opera, music, literature, history, and the nature of genius. Verdi's Shakespeare explores the writing and staging of Macbetto (Macbeth), Otello (Othello), and Falstaff, operas by Verdi, an Italian composer who could not read a word of English but who adored Shakespeare. Delving into the fast-paced worlds of these men and the hands-on life of the stage that at once challenged them and gave flight to their brilliance, Wills, in his inimitable way, illuminates the birth of artistic creation.

Garry Wills is a historian and the author of the New York Times bestsellers What Jesus Meant, Papal Sin, Why I Am a Catholic, and Why Priests?, among others. A frequent contributor to the New York Review of Books and other publications, Wills is a Pulitzer Prize winner and a professor emeritus at Northwestern University. He lives in Evanston, Illinois.
A Booklist Editors Choice Pick for 2011

“Wonderfully illuminating. This book is the product of a lifetime of listening and watching….No lover of Verdi—or Shakespeare, for that matter—will want to miss it.”
—Opera News

“Riveting…a double-barreled salvo that hits two bull’s-eyes. Shakespeare scholarship is one of the world’s thriving industries, with no factories but worldwide workshops. While you are reading this, there must be hundreds (thousands?) of worthies turning out articles and books from pole to pole. But ­Garry Wills has upped the ante. There is a fair, but not daunting, amount of musical analysis, as well as much acknowledged borrowing and quoting from other relevant writers. This only makes the book more useful, what with burrowings (rather than borrowings) a worm would be proud of, and a panorama worthy of a fly’s multifaceted eye. “Nomen est omen” goes a Latin adage: the name is a signifier. So the noun “Wills” suggests manifold motivation, multiple resolve. Whatever Garry undertakes, trust Wills to get done.”
—John Simon, The New York Times

“Wills’s joyously engaged, scholarly yet personable essay is not just a treat but also a banquet succulent enough to make Shakespeareans and Verdians of all who partake of it.”
—Booklist, starred review

“Wills brilliantly explores the evolution, development, and performance histories of the three plays (actually, four, counting both Henry IV and Merry Wives of Windsor as inspirations for Falstaff), the three operas, and the connections among them. As essential purchase. ”
—Library Journal, starred review

“Wills’s insights into both Verdi’s acute understanding of Shakespeare and his ingenious methods of conveying it are thrilling—particularly his account of how, when composing “Otello,” Verdi encapsulated the six hundred and eighty-six lines of the play’s first act within a few minutes of music.”
—The New Yorker

“One genius interprets another: English to Italian, words to lyrics, immortal drama to overpowering opera. . . . While the book has an enormous amount to teach devotees of either Shakespeare or Verdi, opera fans in particular will enjoy the author’s close and illuminating attention to backstage history, as well as words, music and phrasing.”
—Kirkus

“Despite the novelty of the subject in VERDI'S SHAKESPEARE, Wills’s writing is characteristically clear and marked with literate ping. . . . Throughout, he demonstrates an innate understanding of drama and music and how they can work together. His analysis of melody, harmony and orchestration are as solid as his examination of theatrical practice and technique. And his research is thorough. He draws on the considerable store of data unearthed by others, citing in his more than one hundred footnotes a veritable Who’s Who of opera and theater scholars.”
—The Washington Independent Review of Books