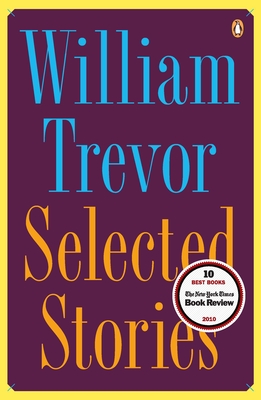 
On Our Shelves Now
“Trevor was our twentieth century Chekov."—Wall Street Journal

Selected as one of The New York Times Book Review's 10 Best Books of the Year.

Four-time winner of the O. Henry Prize, three-time winner of the Whitbread Award, and five-time nominee for the Booker Prize, William Trevor is one of the most acclaimed authors of our era. Over a career spanning more than half a century, Trevor has crafted exquisitely rendered tales that brilliantly illuminate the human condition. A powerful collection by "the greatest living writer of short stories in the English language" (The New Yorker), Selected Stories brings together forty-eight stories from After Rain, The Hill Bachelors, A Bit on the Side, and Cheating at Canasta.

William Trevor was born in Mitchelstown, County Cork, and spent his childhood in provincial Ireland. He studied at Trinity College, Dublin. He is the author of twenty-nine books, including Felicia’s Journey, which won the Whitbread Book of the Year Award and was made into a motion picture, and The Story of Lucy Gault, which was shortlisted for both the Man Booker Prize and the Whitbread Fiction Prize. In 1996 he was the recipient of the Lannan Award for Fiction. In 2001, he won the Irish Times Literature Prize for fiction. Two of his books were chosen by The New York Times as best books of the year, and his short stories appeared regularly in The New Yorker. In 1997, he was named Honorary Commander of the British Empire.