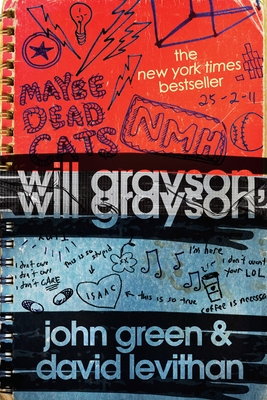 “Will Grayson, meet Will Grayson! Two very different dudes living in separate suburbs of Chicago, who have the same name and the same problems when it comes to matters of the heart. Fortunately, big, loud and flamboyantly gay Tiny Cooper is there to save the day. A funny and moving coming-of-age novel focusing on friendship, trial and error, love, longing, but most important of all, being true to yourself.”
— Jet Hopster, The Book Works, Del Mar, CA

One cold night, in a most unlikely corner of Chicago, Will Grayson crosses paths with . . . Will Grayson. Two teens with the same name, running in two very different circles, suddenly find their lives going in new and unexpected directions, and culminating in epic turns-of-heart and the most fabulous musical ever to grace the high school stage. Told in alternating voices from two YA superstars, this collaborative novel features a double helping of the heart and humor that have won them both legions of fans.
John Green is the award-winning, #1 bestselling author of Looking for Alaska, An Abundance of Katherines, Paper Towns, Will Grayson, Will Grayson (with David Levithan), and The Fault in Our Stars. His many accolades include the Printz Medal, a Printz Honor, and the Edgar Award. He has twice been a finalist for the LA Times Book Prize. John was selected by TIME magazine as one of the 100 Most Influential People in the World. With his brother, Hank, John is one half of the Vlogbrothers (youtube.com/vlogbrothers), one of the most popular online video projects in the world. You can join the millions who follow John on Twitter (@johngreen) and tumblr (fishingboatproceeds.tumblr.com) or visit him online at johngreenbooks.com. John lives with his family in Indianapolis, Indiana.

David Levithan is an award-winning and New York Times-bestselling author of many books for teens, including Boy Meets Boy, Wide Awake, Love Is the Higher Law, and (with Rachel Cohn) Nick and Norah's Infinite Playlist. He also works as an editor and, in his free time, takes way too many pictures. He lives in New Jersey. www.davidlevithan.com
A New York Times Book Review Editor’s Choice
An ALA Stonewall Honor Book

“Will Grayson, Will Grayson is a complete romp. [It is] so funny, rude and original that by the time flowers hit the stage, even the musical-averse will cheer.” —The New York Times Book Review

ê“Will have readers simultaneously laughing, crying and singing at the top of their lungs.”—Kirkus Reviews, starred review

“It is such a good book. [Green and Levithan] are two of the best writers writing today.” —NPR’s The Roundtable

“A brilliant novel.” —The Seattle Times

“A moving novel when it comes to the matters of the heart.” —The San Diego Union-Tribune

“One of the best books of the year.” —Bookpage

“A hilarious collaboration between superstar authors.” —The Daily Beast

“Entertaining . . . produces all the euphoria of an actual musical; readers will be on their feet.” —The Horn Book

“Irresistibly funny, insistently wise, and filled with the honest power of friendship.” —The Wichita Eagle

“This may well be the best novel that either John Green or David Levithan has ever written. Inventive and insightful.” —Shelf Awareness

“This novel as serious buzz.´—EntertainmentWeekly.com