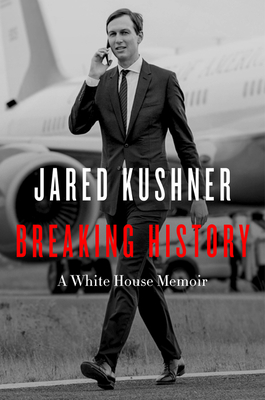 Jared Kushner was one of the most consequential presidential advisers in modern history. For the first time, he recounts what happened behind closed doors during the Trump presidency.

Few White House advisors have had such an expansive portfolio or constant access to the president. From his office next to Trump, senior adviser Jared Kushner operated quietly behind the scenes, preferring to leave the turf wars and television sparring to others.

Now, Kushner finally tells his story—a fast-paced and surprisingly candid account of how an earnest businessman with no political ambitions found himself pulled into a presidency that no one saw coming.

A true historical thriller, this book is not your typical political memoir. Kushner details Washington’s intense resistance to change and reveals how he broke through the stalemates of the past. An outsider among outsiders, Kushner was a results-driven executive among beltway power brokers. He questioned old assumptions and delivered unprecedented results on trade, criminal justice reform, production of COVID-19 vaccines, and Middle East peace. His successful negotiation of the Abraham Accords, the most significant diplomatic breakthrough in 50 years, earned him a nomination for the Nobel Peace Prize.

Written by one of the few people by Trump’s side from his trip down the golden escalator to his final departure from Andrews Air Force Base, Breaking History provides the most honest, nuanced, and definitive understanding of a presidency that will be studied for generations.

Jared Kushner is the founder of Affinity Partners, a global investment firm. Previously, he served as Senior Advisor to President Donald J. Trump, and before that, as CEO of Kushner Companies. He also co-founded two technology companies, Cadre and WiredScore. In 2015, he was named to Fortune's 40 under 40, and in 2017 was named one of Time’s 100 Most Influential People. In 2018, Jared received the Aztec Eagle Award, Mexico’s highest honor, for his work on the USMCA trade agreement. He was given a presidential citation for helping to architect Operation Warp Speed, which produced COVID vaccines in record time. In recognition of his success negotiating the Abraham Accords, Jared received the National Security Medal, the Department of Defense Medal for Distinguished Public Service, the Grand Cordon of the Order of Ouissam Alaouite from King Mohammed VI of Morocco, and was nominated for the Nobel Peace Prize. He lives in Florida with his wife Ivanka and three children.