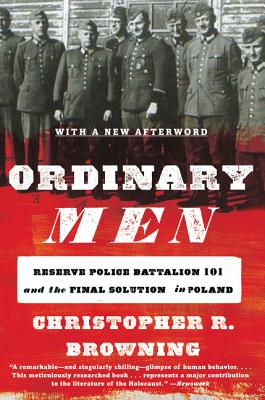 “A remarkable—and singularly chilling—glimpse of human behavior. . .This meticulously researched book...represents a major contribution to the literature of the Holocaust."—Newsweek

Christopher R. Browning’s shocking account of how a unit of average middle-aged Germans became the cold-blooded murderers of tens of thousands of Jews—now with a new afterword and additional photographs.

Ordinary Men is the true story of Reserve Police Battalion 101 of the German Order Police, which was responsible for mass shootings as well as round-ups of Jewish people for deportation to Nazi death camps in Poland in 1942. Browning argues that most of the men of  RPB 101 were not fanatical Nazis but, rather, ordinary middle-aged, working-class men who committed these atrocities out of a mixture of motives, including the group dynamics of conformity, deference to authority, role adaptation, and the altering of moral norms to justify their actions. Very quickly three groups emerged within the battalion: a core of eager killers, a plurality who carried out their duties reliably but without initiative, and a small minority who evaded participation in the acts of killing without diminishing the murderous efficiency of the battalion whatsoever.

While this book discusses a specific Reserve Unit during WWII, the general argument Browning makes is that most people succumb to the pressures of a group setting and commit actions they would never do of their own volition.

Ordinary Men is a powerful, chilling, and important work with themes and arguments that continue to resonate today.

Christopher R. Browning is professor of history at Pacific Lutheran University in Tacoma, Washington. He is a contributor to Yad Vashem's official twenty-four-volume history of the Holocaust and the author of two earlier books on the subject.

“A staggering and important book, a book that manages without polemic to communicate at least an intimation of the unthinkable.” — Chicago Tribune

“Helps us understand, better than we did before, not only what they did to make the Holocaust happen but also how they were transformed psychologically from the ordinary men of [the] title into active participants in the most monstrous crime in human history.” — New York Times Book Review

“It is the care with which Browning examines the evidence, as well as the soberness of his conclusions, that gives this work such power and impact.” — Kirkus Reviews

“A remarkable—and singularly chilling—glimpse of human behavior. . .This meticulously researched book...represents a major contribution to the literature of the Holocaust." — Newsweek