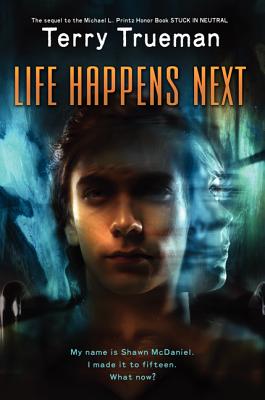 This is book number 3 in the Stuck in Neutral series.

Stuck in Neutral, a Printz Honor Book, introduced the world to Shawn McDaniel, a fourteen-year-old kid with cerebral palsy. But what happens next?

Shawn's got a new perspective on life. But no one has a clue. That's because they can see only his wheelchair, his limp body, his drool. What they don't see? His brain, with perfect auditory memory. And his heart, which is in love with a girl. And his fierce belief that someday someone will realize there's way more to him than his appearance.

How do you connect with others when you can't talk, walk, or even wave hello? In the sequel to Stuck in Neutral, which ALA Booklist called "an intense reading experience," Shawn McDaniel discovers a new definition of "normal" and finds that life happens next for everyone.