The Faith of Graffiti (Paperback) 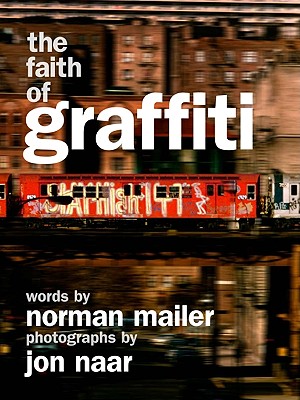 The Faith of Graffiti (Paperback)


Usually Ships in 1-5 Days
The Faith of Graffiti is the classic, definitive look at the birth of graffiti as an art form, pairing the fascinating 1974 essay by Norman Mailer—National Book Award and two-time Pulitzer Prize-winning author of The Naked and the Dead and The Executioner’s Song—with the stunning, iconic photography of internationally acclaimed photographer Jon Naar. Back in print for the first time in three decades and expanded with 32 pages of additional photos, The Faith of Graffiti is a landmark in the history of street art: an essential, contemporary, and still-relevant meditation, in words and pictures, on the meaning of identity, property, and city life.

Norman Mailer (1923-2007) was one of the most important American voices of the twentieth century—a journalist, essayist, novelist, poet, playwright, screenwriter, film director, and public intellectual. The author of more than forty books including The Naked and the Dead, The Executioner's Song, and Armies of the Night, he was twice awarded the Pulitzer Prize, received the National Book Award, and was a member of the American Academy of Arts and Letters.

Jon Naar is an internationally acclaimed documentary and fine art photographer and the author of twelve books, including The Birth of Graffiti and the bestselling Design for a Limited Planet. His photography has been exhibited at the Metropolitan Museum, the Museum of Modern Art, New York, the Centre Pompidou, Paris, and many other museums and art galleries worldwide. He lives in New Jersey.